They say you should post a blog on a regular basis to obtain a greater following. But, ADD, so this is another in the (very) occasional series of posts.

I put the second image below up on social media yesterday and got a few comments, one asking about the ‘experiment’. The experiment is really just fiddling in Lightroom.

The other day I noticed some interesting cloud formations and made some shots. Then started playing around to see what might be appealing. Here is the RAW image: 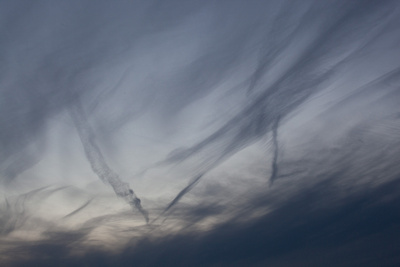 And then the posted iteration:

And the Lightroom develop history:

Of course you will need to read from the bottom up to see the sequence. Two things do not show up in the history, those are the 180° rotation and horizontal flip. My guess is that since they were done in the Library module they were not picked up in the develop history.

Another case of purely post-visualization.

Some of you already know that I was asked to judge/jury the 2019 version of The f-Stops Here photography exhibit at the Hygienic Art Center in New London, Connecticut. It was flattering to be asked to do something that I never thought would be part of my journey into photography. Of course, my first thought was that I would not be able to submit work to the show. My second thought was more like, “Me! Really?!” I suppose it's all part of the impostor syndrome that many of us endure. When I sang in several bands, and played a bit of guitar, I would never say that I was a musician. When I worked at a service station, not a gas station, as the owner always insisted, I never said I was a mechanic. I did the work, but always felt at odds with the 'title'. All these years later I will still not claim either appellation. But after reading some, and talking with some friends, I felt I could do the job, and so I did. It was not quite as difficult as I thought it would be. It was a little surprising that there were not more entries, about 130. The gallery thought they would be able to exhibit around 70. I needed to eliminate about half the work. More could have stayed, but I felt it was better to stay close to the number the gallery felt could be shown well. I have had work in some shows that were overpopulated, and so some work was shown in locations that did not really work well.

I was not asked to provide a juror's statement, but the next day I felt that there were a few things I wanted to say. And so I sent them the following:

First, I'd like to thank Hygienic and Cherie Powell for the opportunity to participate in the role of judging this exhibition, and everyone who entered for putting yourselves out there.

Second, nearly all of the f-Stops Here shows have been judged by white men. I would like to see future shows include other perspectives, as Hygienic has done in other areas. There is so much excellent work being done by non-white, and/or non-male artists and I would like to see how this show might be rendered by someone else. In the end, the art is the art, but it might invite participation from those who might otherwise be reticent.

Regarding the choices for this show, I have, as much as possible, tried to stay away from the personal. A suggestion would be to avoid having signed work, or cover the signatures before judging; this is done in shows at other venues. The work of judging is, as you might expect, a process of elimination. The work that remains is the work that has not fallen below some highly subjective standard that can vary even in selecting one show. A piece that stays might not have if it were larger or smaller, or were framed or matted differently. Is the glass clean, are there unintentional marks on the photo, or matte, under the glass? Everything in the presentation figures into the judgment. What I have tried to avoid, most of all, is hewing to a particular style, genre, or aesthetic.

Photographers need to stop arguing among ourselves about what qualifies as "Photography". To me, none of this matters more than the work itself. Does the work speak to me, regardless of the process the artist used to make it? Don't get me wrong, I'm happy to talk process; it's fun, and you can always learn from someone else's process, but it’s not the most important thing.

In closing, I would like to encourage everyone who entered, whether your work was selected or not, to keep making images and keep entering shows. The photo that didn't get into one show may be the winner of another. MAKE MORE ART.

They say its best to blog consistently, if you blog at all. Never one for rules here is my latest, after a 10 month delay:

The work is getting more abstract, as you can see here. I have not given up representational photography, but the current trajectory will include a series of abstractions in glass block, the first of which can be seen in the Gallery ONE exhibition in the Mill Gallery at the Guilford Arts Center, in Guilford CT. The show opens this Thursday April 18. Opening Reception on April 26, 5-7pm. We will have a closing reception on Saturday May 11, 3-5pm. This begins my second year showing with Gallery ONE.

Seems like it will be fun to see what appears in these distortions.

I'm teaching a 5 week Lightroom class at Spark Makerspace in New London, CT. It begins tomorrow, so there's probably not time to sign up, by the time you read this. There will be more opportunities later. Stay tuned at https://www.sparkmakerspace.org/.

After two years I'm still getting used to being in town. The visual stimulation is great, but I do miss listening to the birdsong wash over us each morning.

I recently attended a presentation by a photographer on the topic of taking great photos with your smartphone. Most non-photographers likely take more photos with smartphones than with cameras, so helping people do a better job of it is worthwhile. What struck me was his strong preference for editing photos in ACR (Adobe Camera Raw), rather than Lr (Lightroom). The editing capabilities of each are essentially the same. So here I’d like to offer a case for using Lr instead, bearing in mind that if you have invested in an Adobe “Photographers Package”, you already have Lr, Ps (Photoshop), and ACR.

As a last thought: The presenter advocated shooting in RAW mode, which, if you are at all serious, you should be doing already. But you’ll probably be using a camera to do so, because unless you are using the very latest model smartphone, shooting RAW will not be an option.

Thanks for reading. If you found it interesting, feel free to share.

This past weekend was a busy, but happy, one. Friday evening Gallery One and Friends opened a show in the Guilford Art Center. I’m a friend. It was a very nice experience to exhibit outside my usual world. The show is open through Sunday May 20, with a closing reception from 2 to 4pm. It would be a great pleasure to see any of you there. The hours are 10am to 4pm each day, except Sundays are 12pm until 4pm. I will gallery sitting on Friday, the 18th, from 1 to 4pm.

Gallery One is an association of mid-career artists working in a wide variety of media and styles from representational to abstract, including painting, sculpture and works on paper. You can see more of their work on their website, and more of mine here.

On Sunday the Connecticut Valley Camera Club, where I am a member, opened our show at Congregation Beth Shalom Rodfe Zedek, in Chester. The exhibit is open until July 27. The building, itself, is a wonderful space. Sol LeWitt collaborated with architect Stephen Lloyd to design a synagogue for his congregation Beth Shalom Rodfe Zedek; he conceptualized the "airy" synagogue building, with its shallow dome supported by "exuberant wooden roof beams", an homage to the wooden synagogues of eastern Europe. I am particularly impressed with the care taken to make the space sound good. The open ceiling and acoustical treatment create traps and absorption that prevents the unwanted reverberation that would make it difficult to converse. This is a sadly overlooked design feature in most modern structures. So, you’ve got plenty of time to get there, and see the exhibit.